South Korea has been an up and coming country for many people to visit and live in. With the rise in K-Dramas and K-pop, South Korea has become a new tourist destination and a place for expats. English teachers have come to an all-time high and expats living in Korea doubled in the last 10 years. Street food has always been something that is part of Korean culture, but with everything constantly changing, the Myeongdong street food scene has stayed strong. Korean street food has increasingly gotten better with new items and many more foods to choose from. If you want to know what to eat in Myeongdong Market, then keep on reading.

Where to get Korean Street Food in Myeongdong Market

Korean street food can be found in many corners all over Korea. However, I suggest you go to some of the Korean food markets to get a variety of different street foods. One of the most popular areas to get street food in Seoul is in Myeongdong. Myeongdong is a big shopping area with many stores from high end, facial care and street vendors. You can easily find many things to buy in this area and it has high traffic for local street food.

What time does Myeongdong Market close?

Myeongdong Market usually closes around 10:00 pm in the evening and opens around 11:00 am – 12:00 pm in the afternoon. Some shops and vendors do stay open until midnight as well, but if you want to make sure you are there when they are open, I suggest arriving before 10:00 pm.

Planning a trip to Korea?

Connect with other travelers | Ask and get answers to all your travel questions | Learn about all the best things to do in Korea | Join our Korea Travel Planning + Guide Facebook Group now.

What street food to eat in Myeongdong Market

It can be overwhelming to figure out what to eat in Myeongdong, but with this comprehensive list, you can get all the best Korean street food has to offer in Myeongdong. 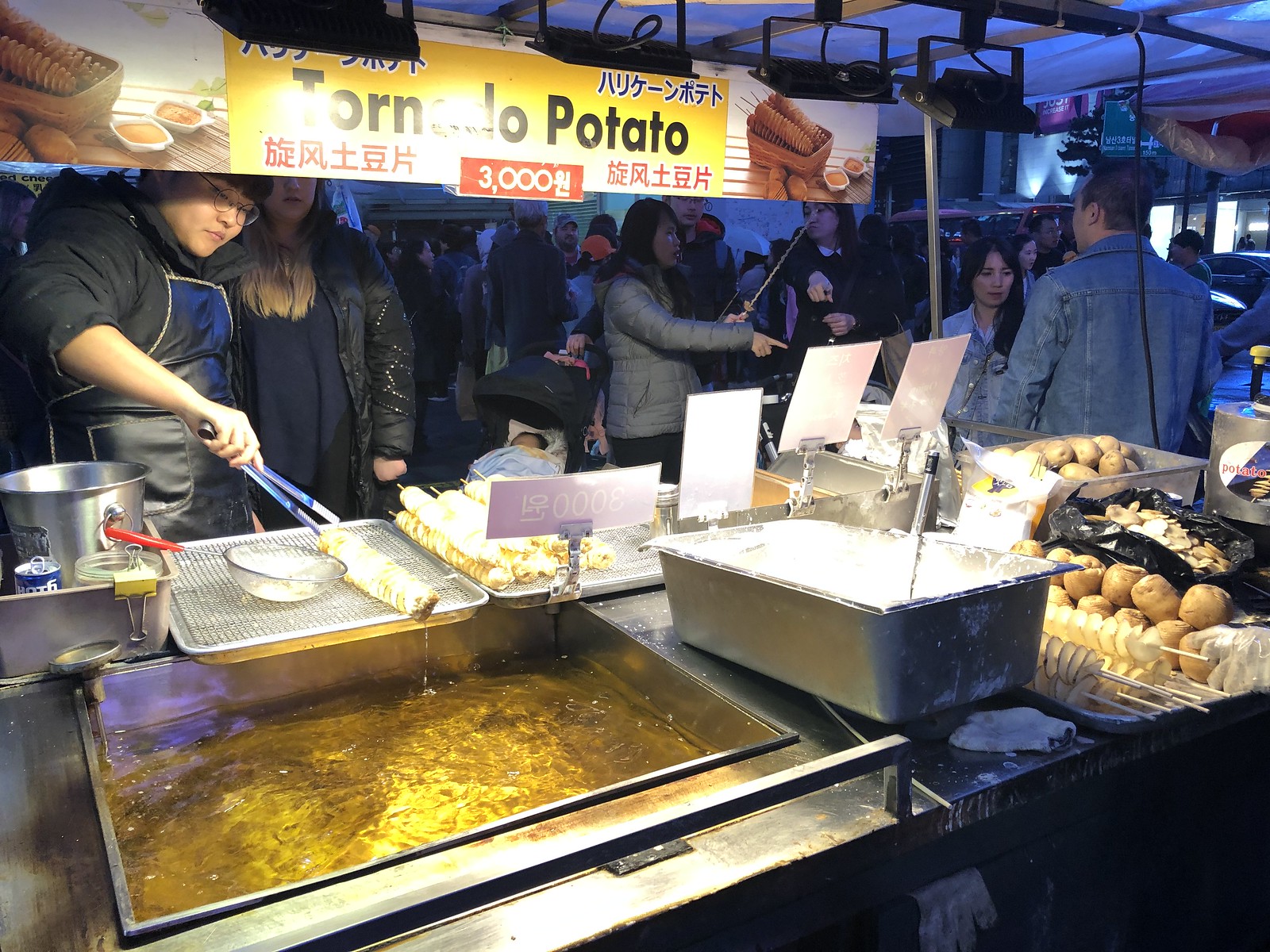 The tornado potato is one of the most popular and instagrammable street food options in Korea. It is very pretty and quite delicious. As you can see they cut the potato in a spiral direction and fry it. It’s pretty much like a long potato chip. It is usually sprinkled it with different seasonings.

This is a popular and longtime favorite in Korea. Tteok-bokki are round rice cakes called tteok that is covered in a red spicy sauce. It also became very popular among foreigners with its chewy texture and spicy flavor. However, not all tteok-bokki dishes are the same. There are some that are sweet and spicy and some that may be very spicy. This is my dad’s favorite dish and it’s very affordable.

Odeng is probably one of the most common street food other than tteok-bokki. Odeng is a fish cake that is placed on a skewer and boiled in a broth for serving and heating. These can be incredibly cheap and easy to get full off of. It is not a spicy taste, but if you are a texture person, they are a bit chewy. 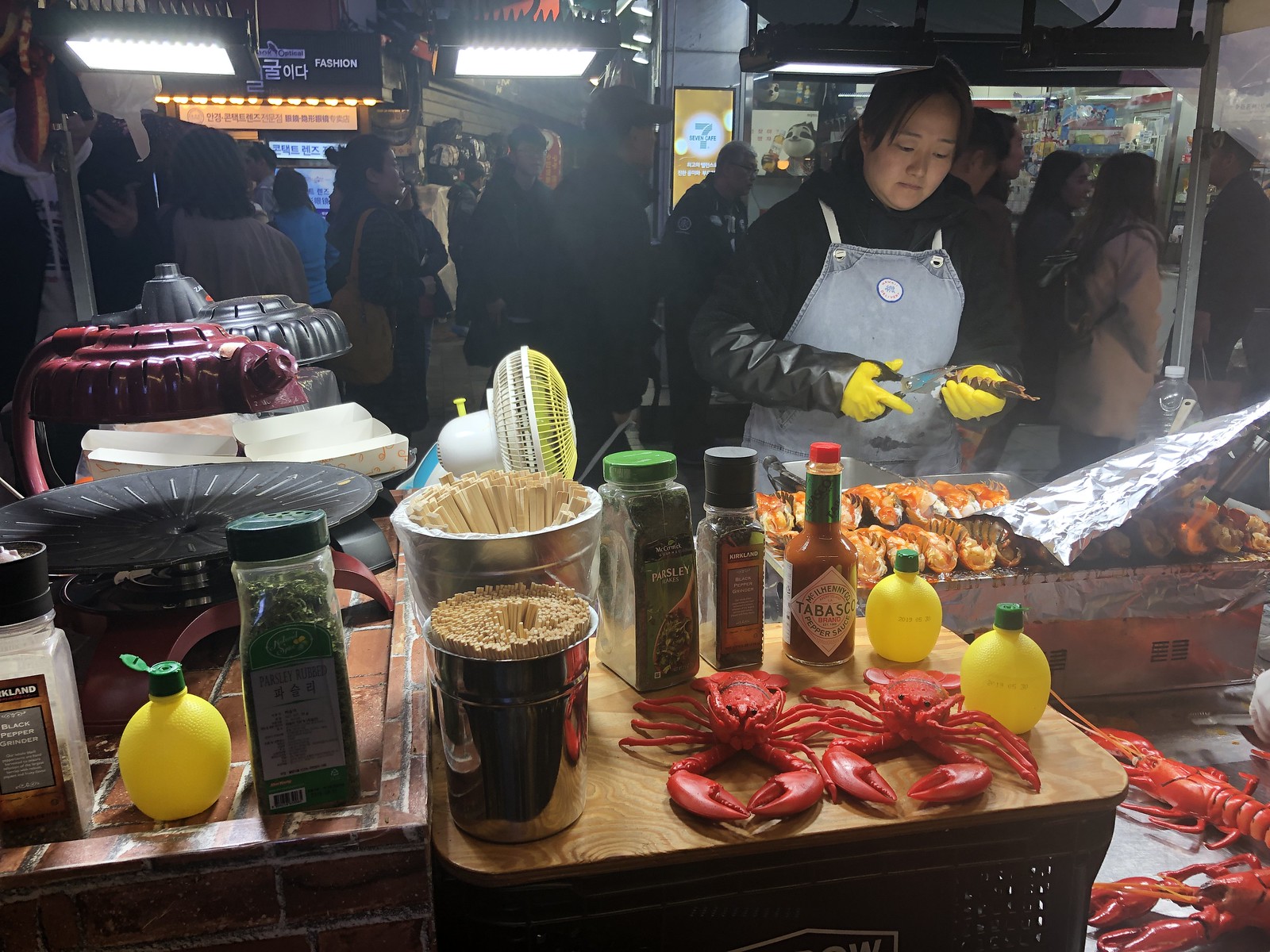 Lobster is a popular street food item in Myeongdong. I haven’t seen it much anywhere else, but it’s become the highlight. I do have to warn it is a bit pricey, but most of the street food in Myeongdong is pricey compared to the less known areas. If you can afford it, definitely try this delicious street food dish.

Kimbap is a Korean staple. Many Korean children grew up eating delicious kimbap either made by their mothers or at the local grocery store. It was one of my favorite things to eat as a kid growing up. Kimbap is the Korean version of a sushi roll. They are often filled with vegetables and meat. You can find many stores and corner stores that sell kimbap daily. 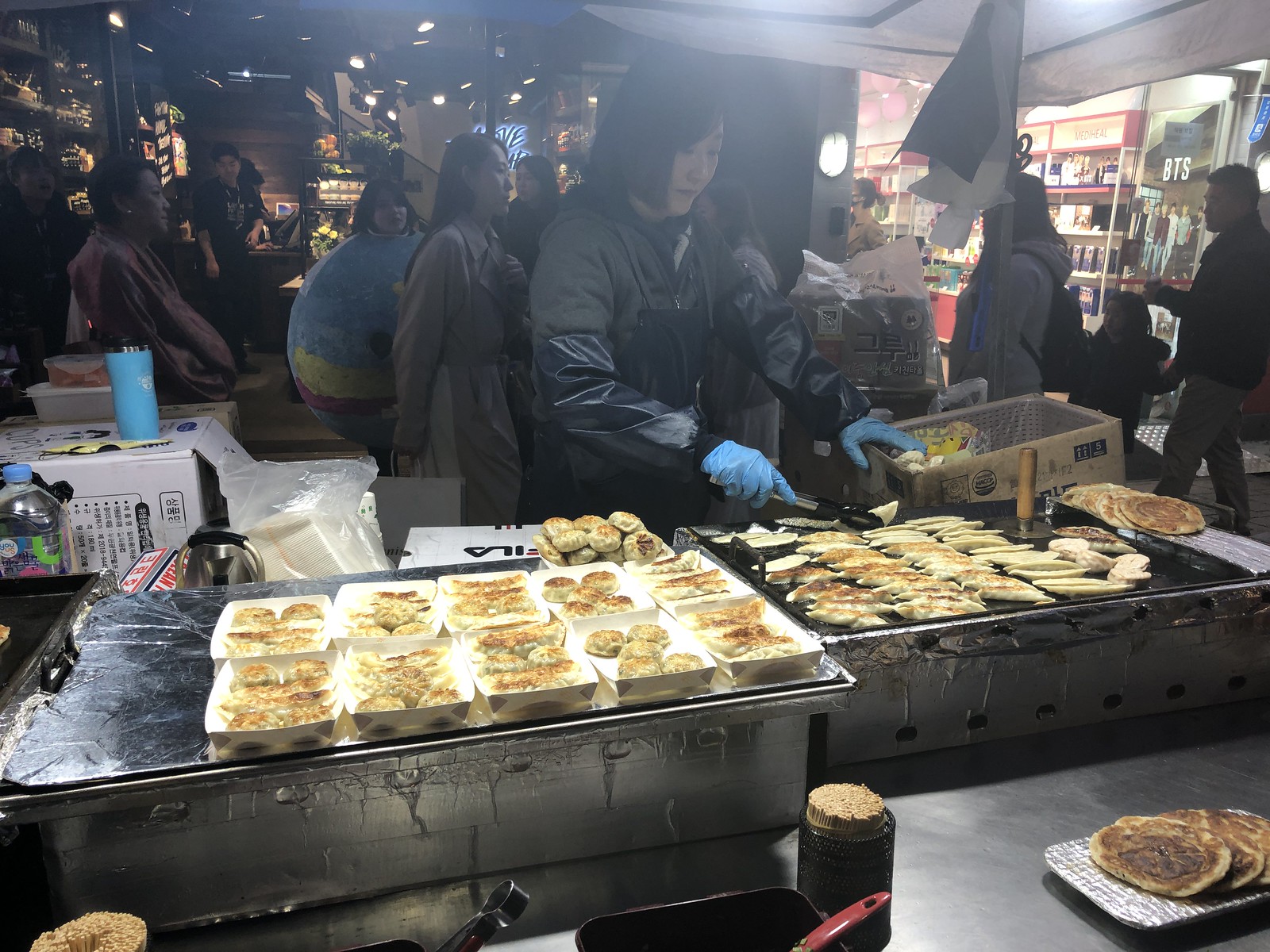 This was my favorite dish growing up. Mandu is a Korean potsticker or dumpling. This is often placed in a soup called Manduguk or fried like a potsticker. Many of the street food vendors, however, will have them fried for you to enjoy. This is popular Korean street food and usually found in more traditional Korean street food markets.

Bbang or 빵 in Korean means bread and 계란 means egg. So this dish is the Korean egg bread. This is a popular street food found in Korea and probably other Asian countries as well. It is absolutely delicious and one of the most popular street food dishes to try. This is one of my favorite Korean street food to eat in Korea because of it’s delicious bread which tastes similar to cornbread.

Squid is a popular dish in Korea and my favorite as a child growing up. It is often dried and heated up on the grill and eaten like jerky. It’s absolutely delicious, some are sweet while others are plain. If you love jerky and you love seafood, I suggest you give this a try.

Kimchi Pancake is a popular dish all over Korea, some people may even call it a Kimchi Pizza. It is a rice flour-based dished fill with kimchi, green onions, onions and sometimes seafood or meat depending on the one you get. There is also a plain green onion one that is not spicy if you want that option. This is a Korean staple you need to try! Also, it is very easy to make and replicate if you do enjoy it. This is classic Korean street food and what you need to eat in Myeongdong.

You have all heard the song with the lyrics  “Roasted chestnuts on an open fire” during the holidays, so this is a popular snack to eat during the winter months. It isn’t found often outside of the wintertime, but when you visit during the winter you will see them all over the place.

This is one of my favorite street foods, although I found it tastes better when my aunt or family members make it. However, you may not have family members who can. This is just a roasted sweet potato that you can walk around and eat. Nothing special except that they are roasted rather than boiled. 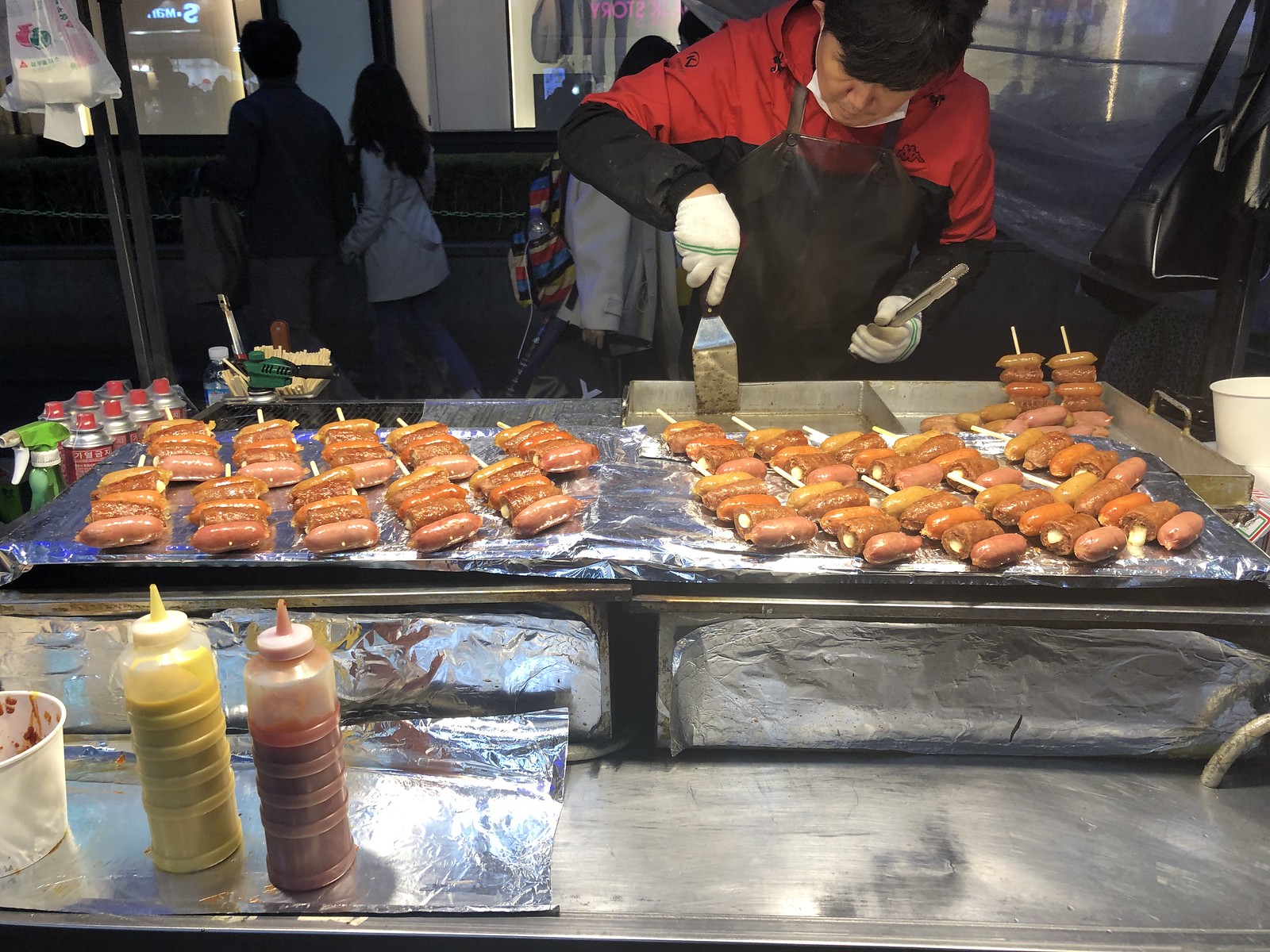 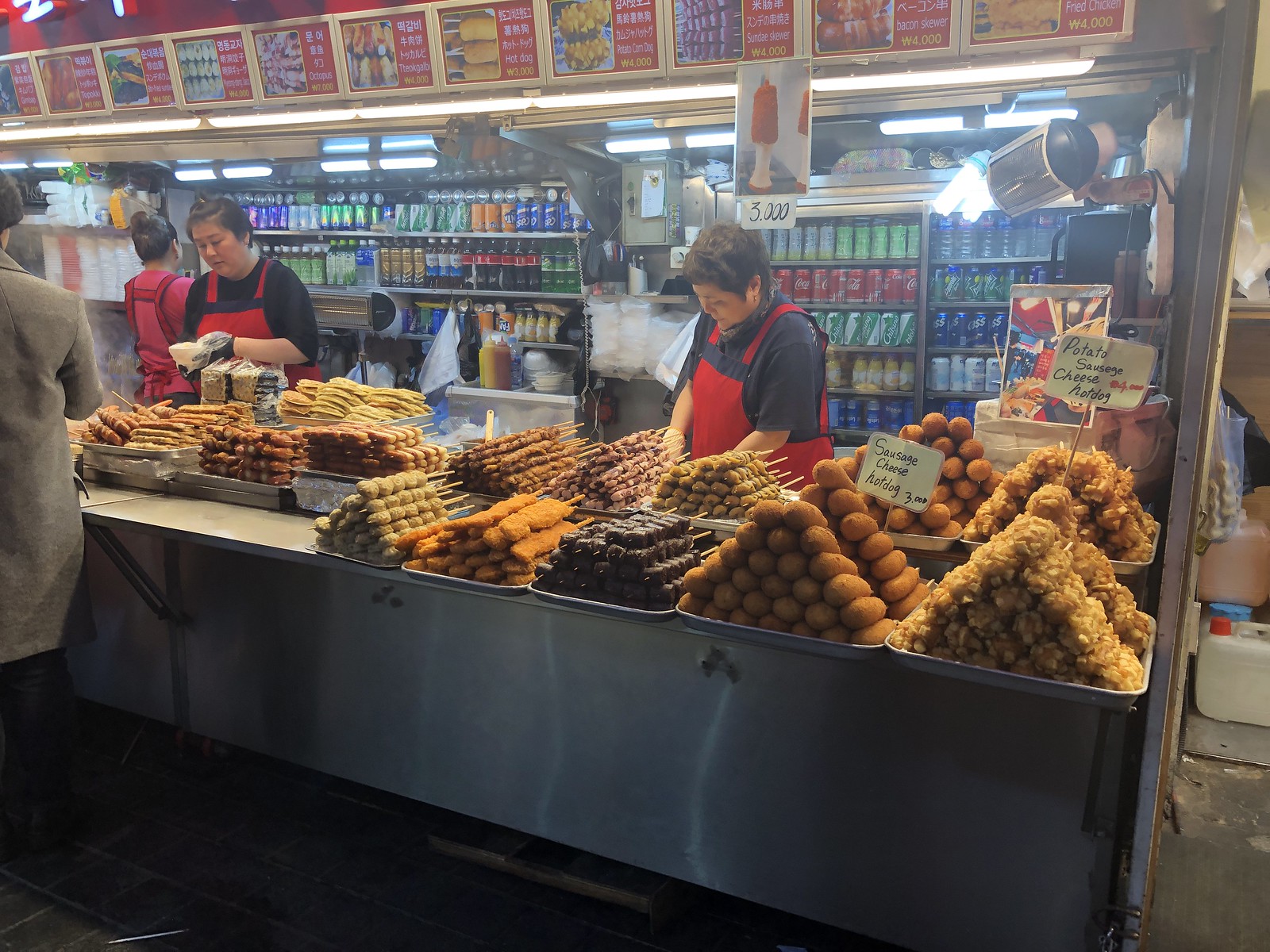 So you will see many of these vendors and many vendors that serve corndogs as well. These are a popular dish in Seoul and all over South Korea. One of the most popular ones among kids is the corndogs of course. It’s the easiest thing for kids to eat and it’s often sweet or non-spicy which is perfect for any age.

Myeongdong Street Food – What Desserts to eat in Myeongdong Market 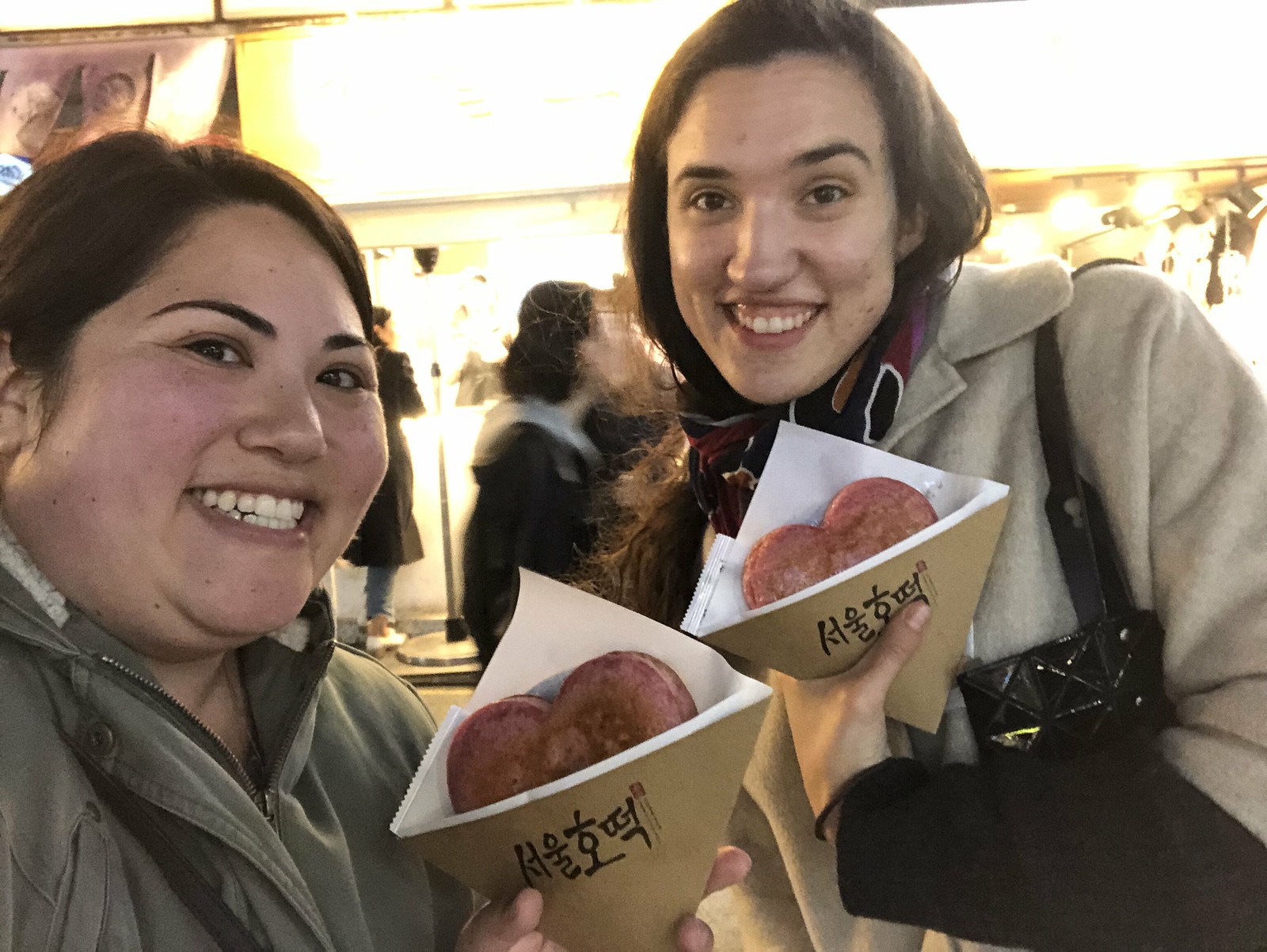 If someone ever asks me what to eat in Myeongdong or what Korean street food to eat, hands down I will always stay Hotteok. Hotteok is probably my all-time favorite street food. This is like a pancake filled with honey, sunflower seeds, nuts and other fillings depending on the location. This item is only served during the winter months and it’s worth getting! However, with Myeongdong’s street food atmosphere, it will most likely be available all year long there. If you can’t find one there, I highly suggest you look for the Hotteok shop in Buchon Village or Hongdae. 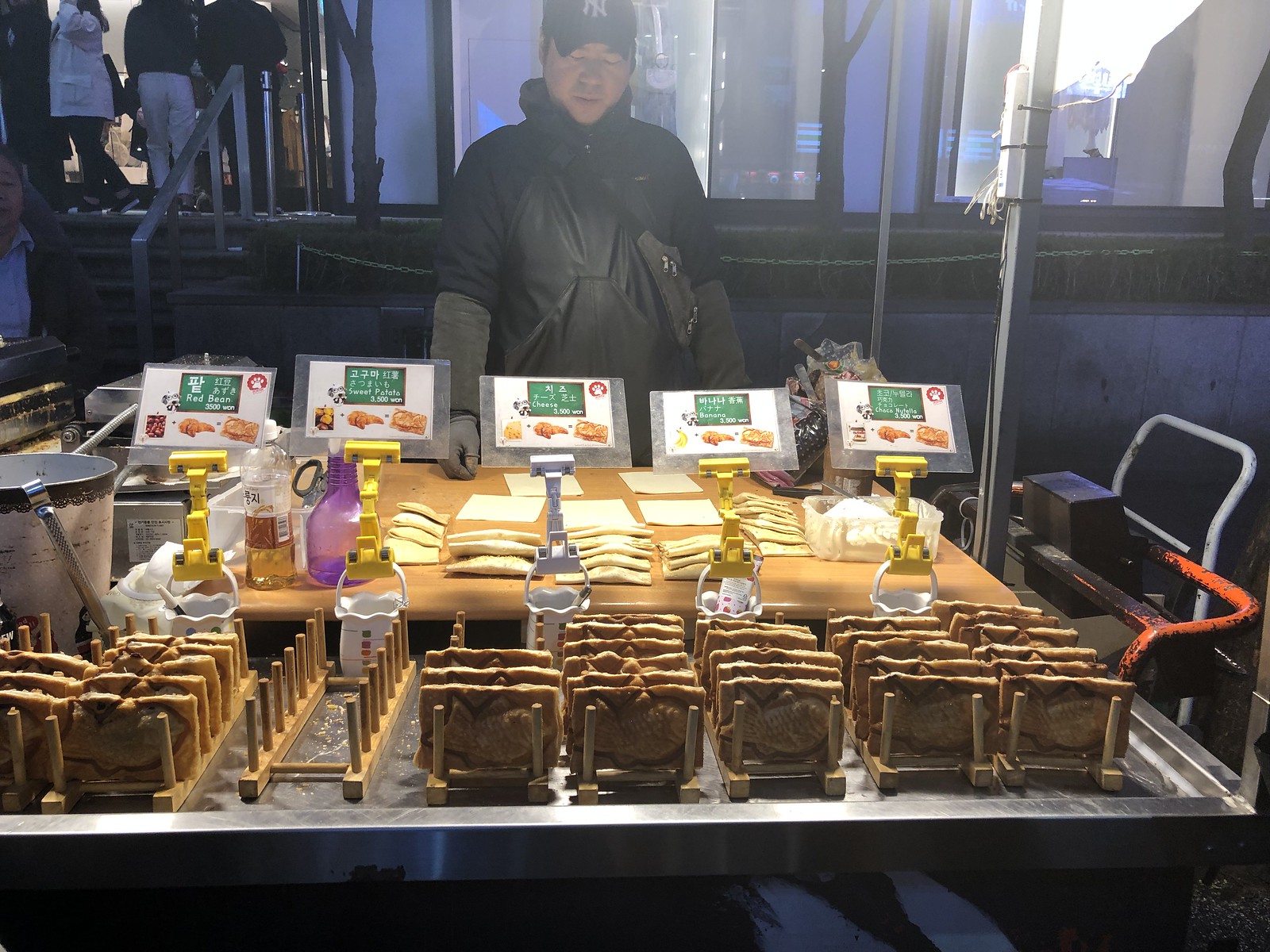 This was my favorite as a child and still continues to be one of my favorites. Bungeoppang are fried rice cake or pancake batter that are made in the shape of a fish. The fish are filled with red beans for a slightly sweet flavor. They usually come in a bag with three to enjoy. 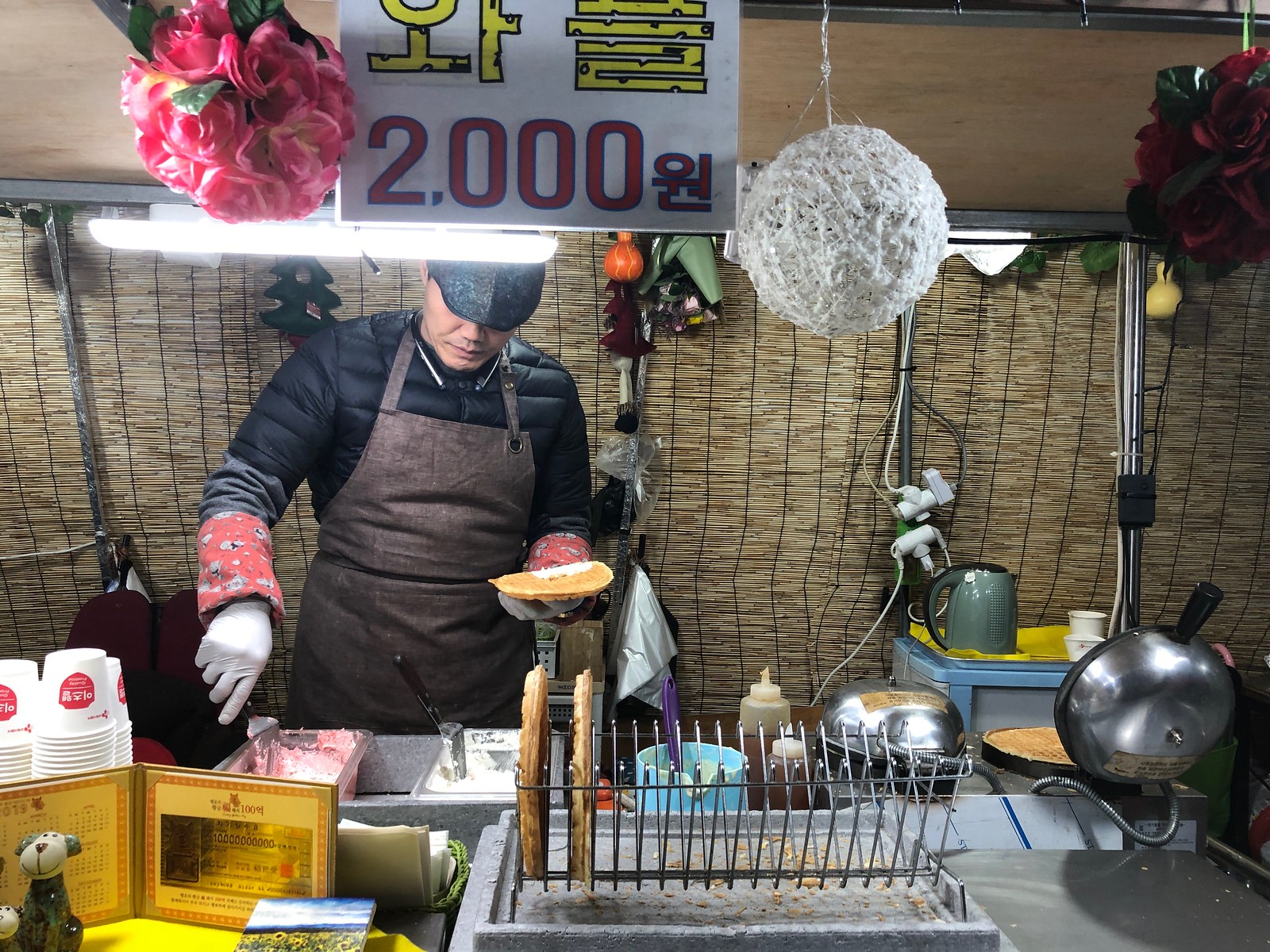 Waffles are a popular dessert in Korea. There are plenty of options and ways to eat it. You can get it plain, just filled with buttercream and honey or ice cream.This is my favorite Korean street food and what you need to eat in Myeongdong or at least try once while in Seoul.

Strawberries on a stick

Most people will tell you that strawberries on a stick are what you need to eat in Myeongdong. These Korean street food treats are popular all over Seoul and especially in the Hongdae area. These are strawberries on a stick covered in a sugar glaze that is crunchy. You need to be careful since the melted sugar hardens it can feel like chewing glass sometimes. The best ones are the ones that are not too thick. This stuff tastes delicious but will definitely get stuck in your teeth.

You came to this page trying to figure out what eat in Myeongdong, well this is a street food is one you should definitely check out. Even if you aren’t interested in eating it, it is very interesting to see how it is made. You will find a few of them speaking in English and explaining how to make this sweet treat. It’s very interesting and I actually find it pretty good. It’s soft and chewy and often filled with nuts and known as the hand stretched cotton candy.

It is made from sugar and syrup which needs to be melted until it reached a solid-state. The sugar is then stretched over and over again 14 times doubling the strands to 16000. This is difficult to do since often times it can break or lose elasticity.

Additionally, if you are looking for what to do in Myeongdong, check out my post about Myeongdong shopping street.

There you have it, some of Myeongdong’s popular street food in Korea. What were some of your favorites? Have you experienced any of these? 안녕! Welcome to Adventures with NieNie! I am NieNie, a Korean American, that has a passion for travel.  I consider myself an unconventional blogger in which I don’t believe in having a niche. Being hapa (part Asian), I am someone that has never been able to fit in a box (ie. ethnicity checkboxes).  I live without borders, so why not create a blog that reflects that by being eclectic and go outside the box.  I am here to inspire, create and motivate.  Enjoy!

Buy me a Coffee